As the temperature rises during the summer season, many households turn to more than just ice-cold drinks to keep them cool. Air conditioning was once regarded as a residential luxury, but has become something of a necessity throughout the United States. Not only will air conditioning cool a room to a bearable temperature during balmy, humid summer days, but also uses the same techniques as a refrigerator to provide ventilation and dehumidification for indoor air. 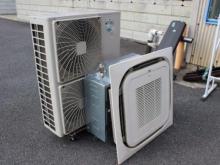 Brief Air Conditioning History The concept of cooling spaces by using natural elements is one that can be traced to the times of ancient Egyptians, who circulated aqueduct water through the walls of various structures to produce a cooling effect. Even in those times, since water was scarce, wealthy residents were only able to enjoy this luxury. During hot weather, medieval Persians created wind towers to cool down buildings. It wasn’t until the early 1800s that a British scientist started to experiment with the compressing and liquefying of ammonia. He learned that liquefied ammonia could chill the air when it evaporated. In 1842, an American doctor named John Gorrie created ice to cool the air of hospital patients and had dreams of using this technology to create a cooling machine for buildings. He tinkered with the plans of constructing an ice-making machine with the help of a financial backer. When his support was no longer available, he could no longer finance his experiments. When he passed away in 1855, the idea of air conditioning was also laid to rest for about 50 years. After the attempts of Gorrie, industrial Air Conditioning was created in the early 1900s with the first modern electrical version of air conditioning. Throughout the years, a shift was seen in the use of air conditioning, as automobiles and households began to benefit from the invention. The Carrier Air Conditioning Company began to lead the way in bringing the concept to the public, and during the 1950s, it was a contagious residential dream. The Pros and Cons The benefit of enjoying a cooler atmosphere during heated weather is not the only advantage gained when turning on the air conditioner. A household, vehicle, and other building environment becomes cleaner and safer for breathing when air conditioning is able to prevent the growth and spread of harmful microorganisms. Individuals who suffer from allergies and asthma are especially thankful for the better atmosphere an air-conditioned room provides, as less dust and dander are present. In seriously hot weather, babies and the elderly also benefit from air conditioning as heat waves have been known to take the lives of those whose immune systems and health might not be the strongest. One of the most controversial topics attached to the subject of air conditioning deals with some of the materials that are used to produce the cooling affect of these machines. Fluorocarbon refrigerants also contribute to global warming concerns, which serves as one of the main ways that air-conditioning impacts the state of the environmental world. Fluorocarbon refrigerants also add to the problems concerning ozone layer depletion.

While the temporary relief that air conditioning provides makes hot summer nights and heat waves a more bearable event, many question how much the world will pay in the long run after the environmental damage has settled. Today, scientists are working on making more environmental friendly products, but for now, individuals are reluctant to part with their instant cool during the thick of summer.